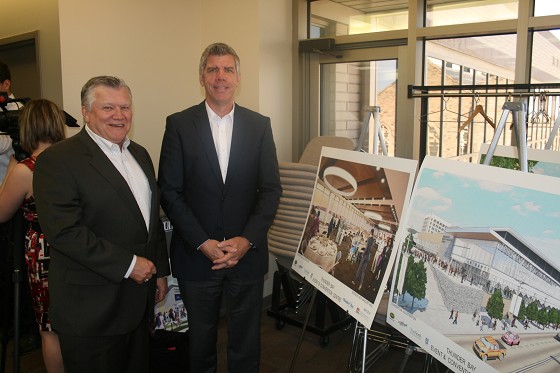 The City can now move forward with the remaining steps in the process to explore developing the facility with the partner consortium including the schematic design for costing purposes and in-depth business plan, which are components for the submission to the Federal and Provincial governments for funding. “We are pleased to have the Letter of Intent in place to continue moving forward with Thunder Bay LIVE! on the next steps which include some exciting community engagement opportunities this month,” said Michael Smith, General Manager – Facilities, Fleet & Transit Services who is the City’s lead on the project. “It’s important to note though, that even with an LOI to define how we work together, there is no guarantee on either side. It is non-binding. The remaining pieces, including funding, need to be in place and Council has made no final decisions.”

“ A highlite of this project is the exterior of the building  where we really tried to capture Thunder Bay with the materials to be used including masonry, a lot of glass to promote the amazing views over the waterfront as well as wood. We want to identify each main entrance with those main elements. On the inside  of the building we have tried to reenforce it is not just a hockey arena but a convention and event centre capable of hosting  a multitude of events from family shows to concerts or hockey.”

“ The site has contributed to what we call in the business, a split level  configuration, which  is a great starting point for the building. It has allowed us to have a very steep bowl with excellent sight lines that contribute to the vibrancy and excitement of the space. It will be a very exciting place to be  and watch an event.  As a 5700 seat facility for hockey, so a very good size,  there won’t be a poor seat in the whole place whether you are a hockey fan or concert goer.” “ This will be a world class facility as it is an hybrid model between a typical multi use building- but the convention component really makes this building unique and much more versatile. It’s going to be different than most facilities you see across the country. I have been designing these facilities  for 25 years  now with most of my career focused on these types of buildings. I love doing it! They are amazing  to watch getting developed  and interacting with all these people, all over the world, and then going to opening day with the opening event and seeing all the faces.”    “ The structure isn’t elaborate. Our experience in design and PCL'S experience in construction  means we will have a very  well outfitted building but not going overboard.  We will spend the budget where it needs to be spent. You have a very demanding climate here so it is important  to put high quality materials on the outside of the  building. You want your facility to last for a generation, basically. We have given a very attractive design that is functional and will work very well.” “ The overall affordable cap is $100 million which included a pedestrian bridge as well as the removal of the hydro sub station and  the equipment you need in the building to make it useable. The VIP suites will rival those anywhere with 23 planned now, but we will study what is  the right number for this market.” “ By having an operator like Global Spectrum as well as BBM Architects and PCL Construction  we find we can be efficient in our design time and there is less risk in having to go back and value engineer things out because you stay inline with the costs  right from the get go. It is a win win win situation. The city is part of the team that gives us feedback as well. Our team resume includes the Air Canada Centre in Toronto and Rogers Centre in Vancouver. BBB just completed the redesign of Madison Square Gardens in New York,  which was a $1 billion project that took about 5 years to complete and was complex. We  do work from 20,000 seat professional buildings all the way  to 1 or 2  ice sheet community projects.”

Frank Russo Senior VP of Global Spectrum “ We will manage, market and operate the facility as a turn key set up. Currently we run three in BC and several in Southern Ontario including the Ryerson facility in the old Maple Leaf Gardens.” “ Our job  is to book a good mix of trade show, convention, meeting, sporting events and  10 to 12 concerts. As we run 125 venues  and 53 arenas across North America we have a network and are in touch  with all of the acts that tour. You could see visually all type of attractions  here such as say Sir Elton John, Canadian artists or country western acts.

Gary Green Senior Director of BBB Architects Gary was the youngest coach of the Washington Capitals in the NHL at age 26 and also did broadcasting with TSN and some international coaching. “ I am excited about the location selected here. The late Mr. Jim Johnson and I stood on that site many years ago. He worked very hard in planting those seeds. The site will be a great beauty shot but also a site with potential economic development. Over 25 years I have seen these type of facilities being a great economic engine for the area.”    “  The number of people who will come to the facility will be for many different events  including much more than just ice sports. Every man, women and child will go to a event  at least once a year. It could be a convention, conference and many other events.”

“  It will change the dynamic of the city. I have enough experience to know that site is the right site and you will see a great amount of activity through the years. An American Hockey league will fit well here with the history of hockey in the community. The American Hockey League  will give Thunder Bay exposure like they have never had before-   continual exposure year after year. It is the second best league in North America behind the NHL. The Winnipeg Jets are doing research and want their AHL team here. You will have the opportunity to reach so many other cities with their radio broadcasts and media coverage. The name of Thunder Bay will get incredible exposure. This  will attract business and the exposure means far more in terms of imaging.”