Port Of Thunder Bay Ready For Another Great Year!

Last year was a good year for the Port of Thunder Bay, making it two in a row. They are hoping to make it three in a row this season! 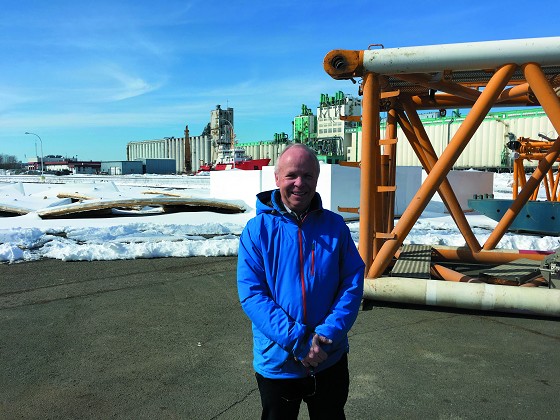 “ Grain picked up almost two million tonnes over the last prior 8 or 9 years. The project cargo has been good as well. We had 15 ships with project cargo here last year at Keefer which is a new record for us in terms of numbers for us,” said Tim Heney, CEO  of the Port of Thunder
Bay.  “ The wheat board had previously been in charge of all grain transportation and there is a totally different out look on it now. The grain companies now own the grain so it is their own grain to ship. The grain shipments are now up about 20% so it has worked well for Thunder
Bay.”

The winter has been milder and made the season longer so the Port will open up earlier than especially the previous two seasons. Two years ago the whole Lake Superior  was frozen over and made for a late start to shipping. Last winter was cold as well but not quite as bad in
terms of the ice build up and thickness.
“  This year we had a very warm start to winter and then when it got a little cold the wind would somewhat break up the ice forming and cause the ice to form later. I don’t think we can predict the weather though and each season can be different even with all the talk of global
warming.” noted Heney.

The grain harvest stored is up 8% over last year on the prairies and some of that has been stored at the farms. It will  now make its way to the collection points and grain elevators after that , so the Port of Thunder Bay expect a good start to the season. The grain farmers may hold some of their grain in hopes of getting a better price for it according to Heney.

This year will be an early start with ships that were being worked on over the winter here in Thunder Bay leaving March 26th, close to but not a record.  The Port of Thunder Bay operated until about January 15th so it will be only a couple months of shut down.

“ The weather has a big impact on how large the grain harvest will be this year and we can’t predict that. Last year the harvest from the summer was coming into the port as early as August but that can vary up until October. Most of the harvest has to be shipped out as they don’t
have enough storage for it.” said Tim Heney.

The Port of Thunder Bay will have some unusual large cargo coming this season. Right now they have a huge crane coming from Alberta to be shipped to Europe.  There are also power transformers for Manitoba Hydro.  They are still moving some oil sands material as well.
“  Thunder Bay is one of the shining lights on the seaway.  There is 140 million tonnes of cargo on the Great Lakes and Thunder Bay does 9 million of that which is good,” said Tim Heney who has been at the Port for 25 years overall now and CEO for 10 years. “ It is an interesting job and gratifying to see the cargo business expand.”