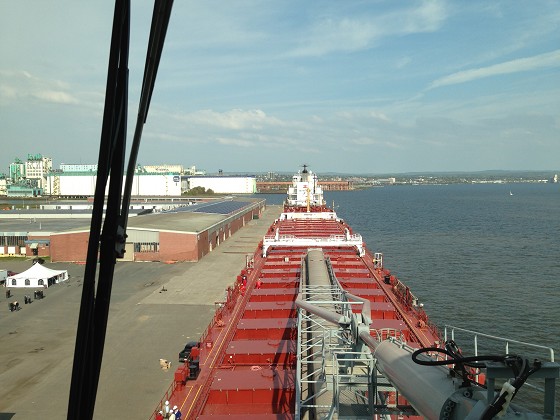 The vessel was named Thunder Bay as part of the revival of the trusty ‘Bay’ series in the St. Lawrence and Great Lakes fleet, and in honour of the Port of Thunder Bay. The Thunder Bay, which is equipped with state-of-the-art systems that reduce fuel consumption and air emissions, arrived at the port light ship after discharging iron ore pellets in Nanticoke, Ontario. In Thunder Bay, she will load wheat, which she will discharge in Montreal, Quebec.

During a formal ceremony, Louis Martel, President of CSL, announced that the company would donate a 2.4 meter-long (8-feet) model of the Thunder Bay as a gift to the community.
Martel also paid tribute to the importance of the Port of Thunder Bay to the company’s business. “The Port of Thunder Bay is the gateway for Prairie farmers to export their grain via the Great Lakes-Seaway system to overseas markets in Europe, North Africa and the Middle East.”
The Thunder Bay is the third of four new Trillium Class vessels to join CSL’s Great Lakes fleet. Conceived and built as part of CSL’s ambitious
fleet renewal program, Trillium ships are equipped with the most
advanced, sustainable and safe technologies available on the market
today.

“We built these ships to meet the high environmental standards expected by the communities in which we operate,” said Martel. “The Thunder Bay and all Trillium Class vessels use 15 per cent less fuel, release fewer
emissions and dust, and provide outstanding operational efficiency.”

Thunder Bay Mayor Keith Hobbs said:  “The Port of Thunder Bay and the marine shipping industry have long been an essential part of our local economy, creating jobs and helping to attract investment to our region. Fleet renewal by Canada Steamship Lines and other Canadian shipowners will help ensure that our port remains competitive and sustainable.  We are honoured to have this beautiful ship named after our city and to receive a model of the M/V Thunder Bay as a gift for the community.”

Greg Arason, Chair of the Board of the Thunder Bay Port Authority, said: “The investment in new state-of-the art vessels for the Seaway provides confidence for the future. To have one of the first new ships named after Thunder Bay is a great honour.”

Canada Steamship Lines is a division of The CSL Group, the world’s largest owner and operator of self-unloading vessels. Headquartered in Montreal with divisions based in the United States, the United Kingdom, Norway, Singapore and Australia, CSL delivers more than 70 million tonnes of cargo annually for customers in the construction, steel, energy and agri-food sectors. Trillium Class is a trademark of The CSL Group.

Greg Arason, Board Chair of the Thunder Bay Port Authority, “ The real value is the investment and confidence in the system, the Great Lakes Seaway. It is something we have wanted for a long time- to see reinvestment. We see this ship, the Thunder Bay, coming on board and others as well as work that is being done along the seaway. It is a great day for the Port because it signals there is a future for the Port. We compete with Duluth for grain on the seaway for example. This means to us that there is a commitment to service this Port, to store a lot of grain. It is a signal that the grain industry is behind us and we are here to do business and move their product. It is a big
investment with this ship, the technology the fuel efficiency and ease
of loading. There are many benefits and I think we will see this
continue.”

Louis Martel, President Canada Steamship Lines    “ We are very excited to be in Thunder Bay today with the Thunder Bay ship. This is the third of 4 trillium class vessels we have commissioned. The class trillium was chosen to signify our commitment to the environment as well as efficiency and the commitment to our customers and the industry.”    “ This ship has all the latest technology including a high efficient engine from a fuel combustion point of view. All of the equipment was chosen for this. We have a power take off from the engine to generate power and don't have to use generators. We have LED lights, variable frequency motors, a bow and stern cluster that helps move the ship. There are 18 crew members on this ship.     “ It will take the Thunder Bay 5 days to reach Montreal from here. The ships are moving for 9 1/2 months and don't stop. They get
maintenance in the winter. This ship can't go in the ocean. It is not
built to go on the ocean and had to be reinforced for the journey from
China where is was built at a cost of around $45 million.”    “ Our business is going well. The summer was a bit quiet but we expect a very strong fall. ”