The Port of Thunder Bay welcomes today a new Canadian Laker built specifically for transporting grain from Thunder Bay to the St. Lawrence River. MV CWB Marquis arrived in port last evening and will be taking on its first ever load of grain today at Mission Terminal. CWB Marquis is the first vessel to be owned by CWB, formerly known as the Canadian Wheat Board. The vessel is named after the historic "Marquis" wheat variety, the first wheat variety bred specifically for the short Canadian growing season. "Marquis wheat has a long and distinguished history on the Prairies and we are proud to name CWB's first laker vessel in honour of its legacy," said CWB president and CEO Ian White. "Almost every variety of wheat grown on the Prairies since the beginning of the 20th century can be traced back to Marquis wheat." 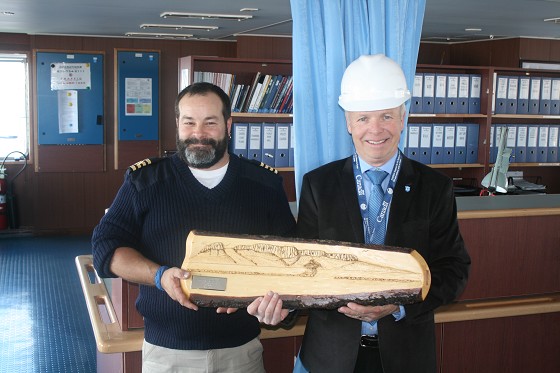 The vessel is the third Equinox-class vessel to enter service on the Seaway, joining Algoma Central Corporation's Algoma Equinox and Algoma Harvester. Algoma Central Corporation will operate and manage CWB Marquis, along with a second CWB fleet-mate to be delivered later in 2015. Equinox class vessels are touted as the next generation of Great Lakes bulk carriers with the ability to carry more cargo, sail faster and consume less fuel than their predecessors. The ships are also more environmentally friendly with exhaust scrubbing systems designed to remove 97 per cent of sulphur oxide emissions generated by the vessel engines. Winnipeg-based CWB is an experienced wheat and barley marketer, having sold grain to over 70 countries. Since the elimination of its monopoly on wheat and barley grown in Western Canada in 2012, the organization has been transitioning toward a private operating model that includes a network of strategic grain-handling assets and farmer ownership.

CWB has initiated a series of elevator construction projects and acquisitions across the prairies and in port, including the acquisition of Mission Terminal in the Port of Thunder Bay last year. Today's load of 30,000 metric tonnes of wheat and durum, destined for Trois Rivieres and then to Cuba, will be the first of many. CWB Marquis will be used extensively to carry grain eastward out of Thunder Bay, and iron ore on the return trip from seaports back into other Great Lakes ports.

Seann O’Donoughue, Captain, Master of the  motor vessel. “ The keel on this ship was laid on the 24th of December, 2012 and we got possession of the ship October 31st, 2014. We sailed from China to Canada which  took 67 days  just to get to Canada. This ship will do 14. 6 knots per hour. It was over 15,600 nautical miles  from China  to Canada and then 1800  nautical miles to  Thunder Bay for a total almost 17,000 miles” “ We have a crew of 19 on board and usually take 2 cadets or apprentices with 17 regular crew members. The ship is  225 metres or 740 feet long, 78 feet wide and the seaway locks are 80 feet giving us 2 feet to spare! The 9450 HP engine  is a 5 cylinder. We are going to carry 30,300 metric tonnes of cargo. Previously the ships held about 26000 tonnes.” “ The older ships were built in 1959 by slide rule and these new ships, including the engine, are build by computer  so they are fuel efficient. The new ship is over 50% more fuel efficient. The hull design is better as well for a working life of 40 years. The ship cost is about $40 million.” “ It is a great  ship, comfortable, quiet, easy to handle, a really good ship.We have better computerized equipment to better monitor our navigation and progress as we go along. It is an all electronic ship and we don’t use any paper. There are many redundant systems in place as well. This ship had three control stations with the ability to see right down the side of the ship from one. We can  back out a 1 1/2 kms into Thunder Bay harbour if we want which can be helpful at times.”    Seann O’Donoughue has been sailing for 31 years. It is usually 2 months working on the ship and two months off with three months off in the winter time.

Tim Heney, CEO Port of Thunder Bay “ It is a beautiful  ship and great to see someone investing this much money in the seaway. This is the seventh of 15 ships they are building for the seaway. It is a major investment and the biggest since the seaway opened. It is like having an old car from the 60’s and buying a brand new one, it is a lot different.”