“Dr. Burney is an accomplished individual with a national and  international reputation and deep roots in Thunder Bay,” said Lakehead  University President and Vice-Chancellor, Dr. Brian Stevenson.  “Lakehead University is honoured that this former ambassador to the  United States from 1989 – 1993 will now represent our great university  at home and abroad." 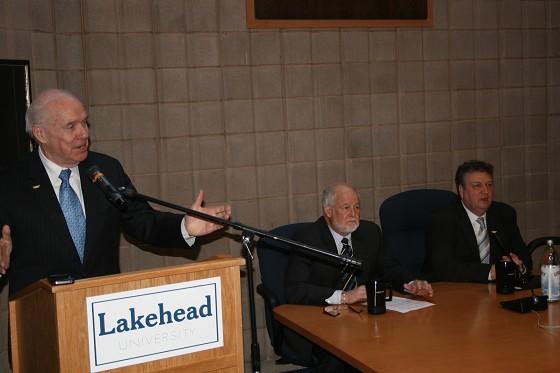 “We are very fortunate to have as our new Chancellor someone with so  much energy and vast experience in diplomacy, business, politics and  academe,” said Mr. Cameron Clark, Chair of the Board of Governors at  Lakehead University. “Dr. Burney will help us achieve our strategic  goals and connect us to the world.”

Dr. Burney is Senior Strategic Advisor to Norton Rose Canada LLP. He is  Chairman of GardaWorld’s International Advisory Board, a Director of  TransCanada Pipelines Limited, a Governor of the Ottawa Hospital Board  of Governors and a member of the Advisory Board of Paradigm Capital  Inc.

Dr. Burney was President and Chief Executive Officer of CAE Inc. from  October 1999 until August 2004. Prior to joining CAE, Dr. Burney was  Chairman and Chief Executive Officer of Bell Canada International Inc.  (1993-1999). Dr. Burney’s assignment as Canada’s Ambassador to the  United States culminated a distinguished thirty-year career in the  Canadian Foreign Service, during which he completed a variety of  assignments at home and abroad, including a period as a Deputy Minister  of External Affairs.

From March 1987 to January 1989, Dr. Burney served as Chief of Staff to  the Prime Minister. He was directly involved in the negotiation of the  Canada-U.S. Free Trade Agreement. He was the Prime Minister's personal  representative (Sherpa) in the preparations for the Houston (1990),  London (1991) and Munich (1992) G-7 Economic Summits.

Dr. Burney, who was born in Fort William, married his Port Arthur  sweetheart Joan Peden and together have raised four boys.

Dr. Burney will take on his official duties after he is installed as  Lakehead University’s Chancellor in a special ceremony at Convocation  in June 2013.

The selection process for Chancellor of Lakehead University involved  soliciting the public and University community for nominations.  Candidate nominations were received and reviewed by a Chancellor’s  Electoral Board, who recommended the appointment of Dr. Burney.

“ My commitment to education is why I accepted the position. I have  been a long time supporter of Confederation College for more than a  decade. This was a way I could balance what I did at the college at the  level of the university. To me education is the most important thing in  life. Without it you can’t do very much and with it you can do almost  anything.” “ I realize it is primarily a ceremonial role but I know theat Dr  Stevenson wants me to help with  representing of the university and  with fundraising, bolstering the image and attraction of the  university.” “ Thunder Bay has always been a very important part of my heritage as I  grew up and went to school here. My mother was a great believer in  education and had very rigid standards. She didn’t accept second best  at any time.  I like the idea of  the more intimate campus.  University's with 50,000 students are not something I look at with  positive views. I hope Lakehead University can maintain the intimacy.” “ If you are fortunate to run into one good teacher in your educational  journey you will  be blessed and  never forget them.  I am committed to  eduction because if we maintain a good education system we open avenues  for our children and grandchildren that very few other countries have.  Where else do you think a kid growing up in Fort William could  become  Canadian Ambassador to the US.”

“ We wanted to have a Chancellor to follow  Dr. Arthur Mauro, who was a  great and wonderful Chancellor for Lakehead University. We wanted  someone who had roots in the community and whom could help us connect  to the world with government, diplomacy and the corporate area. Dr.  Derek Burney brings all these attributes. The Chancellor also confers  degrees which is an important role at the university.”