His Excellency the Right Honourable David Johnston, C.C., C.M.M., C.O.M., C.D., Governor General and Commander-in-Chief of Canada made a visit to Thunder Bay March 29th. I was able to talk to him after a tour of the new cyclotron at the TBRRI. 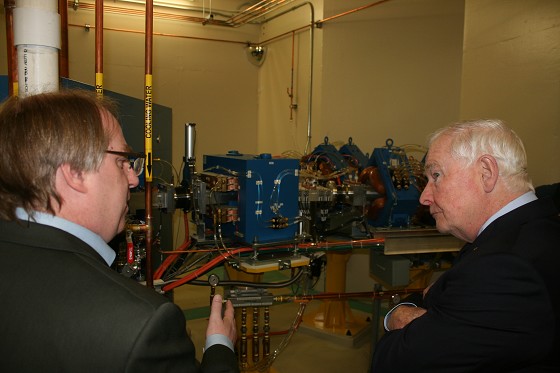 “ It  is very exciting to see what is going on in Thunder Bay. Here we are in the imaging area with the cyclotron.  We have learned so much about  imaging in the last 20 to 30 years. It is great to see Thunder Bay and this research lab at the forefront, producing isotopes that will  help us in Canada and around the world treating cancer.”
The Governor General grew up in  Sault Ste Marie and Thunder Bay would be on his road map as they travelled west. He was appointed  for 5 years as Governor General  and was asked to stay on for two more years past the election, until September 2017.
“ There is no job description in this position but when I was installed my address was “A Smart and Caring Nation - Call to Service.” We want  to emphasize people looking after each other in smart ways. The position has a lot of travel in Canada and abroad.”
On this day the Governor General awarded the Care Canadian Awards of Unsung Canadians.
“ I have enjoyed everything in my career and have been on a 1 year absence from my law firm for 51 years now! When I finish this position I will go back to being a law professor again. Canada is a county that is long in geography and short on history. Our success has been in
bridging those distances physically and socially.”

David Johnston was born in Copper Cliff, near Sudbury, Ontario on June 28, 1941, the son of Dorothy Stonehouse and Lloyd Johnston, the retail manager of a local hardware store. Following the family’s move to Sault Ste. Marie, he attended Sault Collegiate Institute and played under-17 hockey with future hockey hall of famers Phil and Tony Esposito. Mr.
Johnston went on to attend Harvard University, where he earned a Bachelor of Arts degree in 1963, twice being selected to the All-American hockey team on his way to being named to Harvard’s athletic hall of fame. He later obtained Bachelor of Laws degrees from the University of Cambridge and Queen’s University. In 1964, he married his high school sweetheart, Sharon Johnston, with whom he has five daughters. They are grandparents to 12 grandchildren.
Mr. Johnston’s professional career began in 1966 as assistant professor in the Queen’s University law faculty. He moved on to the University of Toronto’s law faculty in 1968, and became dean of Western University’s law faculty in 1974. He was named principal and vice-chancellor of McGill University in 1979, serving for fifteen years before returning to teaching as a full-time professor in the McGill Faculty of Law. In June 1999, he became the fifth president and vice-chancellor of the University of Waterloo, serving until 2010 when he was asked to serve
as Canada’s 28th governor general.
Throughout his career, Mr. Johnston has served on numerous provincial and federal task forces and committees, as well as on the boards of a number of public companies. He was president of the Association of Universities and Colleges of Canada (now Universities Canada) and of
the Conférence des recteurs et des principaux des universités du Québec. He was also the founding chair of the National Round Table on the Environment and the Economy, and he chaired the Canadian Institute for Advanced Research, the federal government’s Information Highway Advisory Council and was the first non-American to chair Harvard’s Board of Overseers.
Mr. Johnston is the author or co-author of more than 25 books, including new editions, and he holds honorary doctorates from more than 25 universities and learning institutions in Canada, China and India. He was invested as an officer of the Order of Canada in 1988 and
promoted to companion, the Order’s highest level, in 1997.On October 1, 2010, His Excellency the Right Honourable David Johnston was sworn in as the 28th governor general since Confederation. His motto, CONTEMPLARE MELIORA, meaning “To envisage a better world,”
refers to his belief in the abilities of all Canadians to imagine and create a smarter, more caring nation and contribute to a fairer, more just world. The motto appears on His Excellency’s coat of arms along with a crest, arms and supporters reflecting the priorities of his mandate. In the Governor General’s view, a smart nation is one that learns from the past, embraces the future and looks to the world with confidence and respect, while a caring nation recognizes that the
measure of any society’s success lies in its ability to help others, particularly the vulnerable and marginalized among us.
Together with Her Excellency Sharon Johnston, the Governor General is focusing his mandate on strengthening the pillars of learning and innovation, philanthropy and volunteerism and families and children.
His Excellency has inspired and launched a number of major new programs and initiatives, including My Giving Moment and the Governor General’s Innovation Awards. He revitalized the Caring Canadian Award program which recognizes individuals who volunteer their time to help others and, with Her Majesty The Queen’s approval, he supported the creation of the Sovereign’s Medal for Volunteers, an official Crown honour which will incorporate and replace the Caring Canadian Award. The Governor General also supported the introduction of the Polar Medal, a program that replaces the Northern Medal, to celebrate Canada’s northern heritage and recognize achievement in the polar regions and in Canada’s North. Additionally, he established the Rideau Hall Foundation as a means of strengthening the institution’s ability to serve Canadians through a range of initiatives linked to leadership, education, innovation and giving.
In keeping with his role and responsibilities as governor general, His Excellency has visited hundreds of cities and small towns from coast to coast to coast during his mandate. He has represented Canada on more than 40 missions abroad. In March 2015, His Excellency accepted a prime ministerial request to extend his mandate by two years, until September 2017.