Coleman Hell grew up in Thunder Bay’s Northwood area and has always had a great interest in music. The 25 Year old now lives in Toronto with his bandmates Rob Benvegnu (a.k.a La+ch) and Michah Dowbak.  Coleman has been  actively pursuing a full time music career for 7 years now which seems poised to take off  with the recent Columbia Records signing to an international recording deal. His current single Two Heads has received over 8 million plays on Spotify.    I talked to Coleman recently by phone from his West Toronto home. 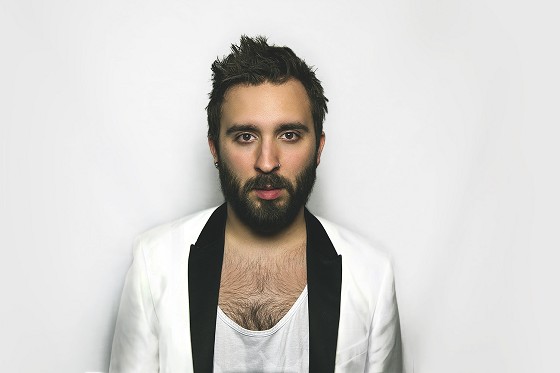 You have always had a major interest in music Coleman?

“ When I was younger I listened to  my parents music but was kinda of making up my own songs in my room and playing shows, always doing it in some capacity. At the start I wasn’t always super vocal about being in music but it is something I always felt inside.  Since I was 17 I have been seriously pursuing music, playing shows at local bars in Thunder Bay.

You started out as a rap group?

“ I was in a band called Burns n Hell and we had a rap song out about Thunder Bay. Thunder Bay heard me doing rap but I was always singing. My favourite thing to do is writing songs. We have put out many songs  on You Tube since then and also have many not out yet. I have been in Toronto for about 5 years. Thunder Bay has a good music scene but Toronto has a lot more opportunity to play shows, collaberate and meet people. It is a huge diverse scene.

Up until now you have been an independent artist?

"I have been independent pretty much the whole time I have been here in Toronto until recently. We write and record our own songs, shoot the videos and put them out ourselves including doing the artwork. Some of the songs we have released have good views and  I think we have a following. Our song Two Heads has over 8 million plays on Spotify which is pretty crazy. That has been our biggest success to date  and has caught the ears of some important people.”

You signed a recording deal with Columbia. What does that mean for you Coleman?

We signed with Columbia a few weeks ago. It means we are going to have a much larger support system and bigger opportunities. For example the song Two Heads we released on line. The label  will now work it to radio internationally. We wouldn’t have that opportunity on our own. They have a huge team of people to help so this is good. Canada ia a little bit easier to break in as a independent but the rest of the world is tougher. We have been sitting on an album and tweaking it getting ready to put out.  We will be doing an official video for Two Heads and work it as a single  for the first part of the year. Hopefully when we have gained more attention and the time feels right we can put the album out.  It is done but when it is not out yet we keep adding and changing it.We have a studio is our house and record everything here. We prefer to do things on our  own and want to maintain artistic control. It feels the most natural to us. We are using computers and keyboards.”

I like the acoustic version of a song called Sharpshooter.

“Sharpshooter was having fun and playing it live in our house. We can all play  instruments ourselves in addition to electronic beats. It is kinda fun to play a stripped done version every once in a while, it is cool."

The video of the song All the Monsters is  fun and humourous.

“ We shot it on a road trip from Toronto to New York to Montreal with masks we made ourselves.  We rented a convertible and made a rogue video. It is a lot easier to make music now and release it on your own but the market is also more saturated. There is so much out there so is harder to make your voice louder and get heard over everyone else.”

Things will change now for you as a Columbia recording artist?

“ It is something we have all been working to do as a group so it feels good. I am ready to work even harder at getting bigger. My two band mates are from Thunder Bay as well and we have been living here together, making music and are signed as a group.”

Will you be back to Thunder Bay anytime soon?

“ I would like to do a show in Thunder Bay in the summer. In Toronto we are playing a music festival this summer as well as a festival in New York. We also have a string of Canadian Tour dates, say  a mini tour. We have agents in Canada and people in New York which is pretty fresh and we are still meeting.

Are you getting lots of attention for your music?

“ We are getting lots of feedback, sometimes too much  but is is good hearing all the comments. When I first came to Toronto I was working at a bar and in a music job but am fortunate to be doing this for a few year full time and hope to keep it that way. I wake up  and immediately want to do music so as a long as I can do that  and only that it is pretty awesome.

How would you describe your music Coleman?

“ I like to let other people put their label on our music but maybe pop. I have been focused on singing versus rap. Toronto is probably the best place to be making music  as an electronic or unconventional act whereas Vancouver is mostly rock. We live in the west end of Toronto in the more artsy area. I liked lots of music growing up like- Prince, Steely Dan, Springsteen  and Bob Dylan but like to bounce around to different music today.

How has it been trying to make it in the music business?

“ Music success  has a certain degree of talent and hard work  to it but it is also luck,  perseverance and not giving up. I have known a lot of talented musicians  in my time  that are great but don’t have the drive or want it as much. It is sticking to your guns.”