I sat down with Norm Gale, newly appointed City Manager, Thunder Bay and Keith Hobbs, Mayor of Thunder Bay for a joint interview to talk about several economic topics in Thunder Bay.

Norm Gale, City Manager is originally from Nova Scotia but grew up in Thunder Bay from the age of 14 and considers Thunder Bay home. He went to high school here and then attended Confederation College and Lakehead University and has worked many different jobs here including as a paramedic.

Keith Hobbs Mayor was born in London, England and lived in Southern Ontario before moving to Thunder Bay at age 14.  He went to high school and became a police office here in Thunder Bay.

Norm and Keith got along famously in their previous jobs and do so now. 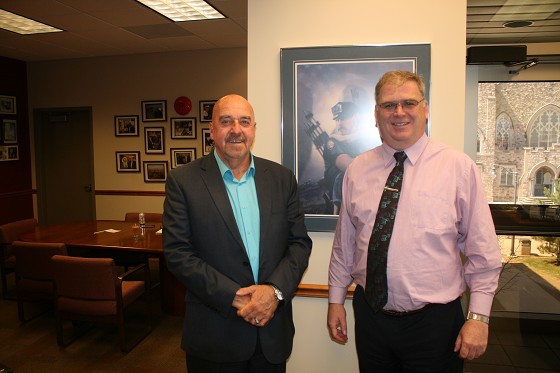 What is the annual budget and number of employees of the City of  Thunder Bay?

Norm “ The City of Thunder Bay has a  $235 million operating budget net and spends about $100 million or so on the capital side so it totals to about $400 million expenditures plus or minus annually. Those funds are to provide services, building things and maintaining things.”

Keith “ Two of our Homes for the Aged facilities were closed down and we lost 300 jobs so have fewer employees now. The St Joseph’s Care Group has done a wonderful job with their new Centre of Excellence facility replacing them.  It is good for people and we now have one
home not three.”

How are the residents responding to the services provided by the City of Thunder Bay?


Keith  “ We put out a citizen satisfaction survey every year and 80 to 90 % of the people say they love the services they get for the taxes they pay.  I would like to emphasize that we are a service provider, not a business. Thunder Bay people pay taxes to the corporation and we as a city administration and council figure out where we are going to spend those dollars, whether it be roads, underground services, infrastructure such as bridges and buildings and so on. We really
strive to get a good quality of life for people here. Most people get that I think, but there are always some who don’t.”

Sometimes you hear people taking about our level of taxation in Thunder Bay. How do you think we compare to other communities?

Norm “ The tax rate is set by municipal council based on the budget needs and the services council wants to provide and the infrastructure they want to build and maintain.  Administration provides budgets and information on that and council makes the decision. Taxes compare based on each class of property.  Generally the taxes are higher or some lower depending on the class and area. You have to have a specific example.”

“ Thunder Bay is 126 square miles in size and we have a lot of roads to plow. Building costs aren’t cheap here and road rehabitation is expensive. The climate has an impact as well. We provide great services and we tax accordingly. If you want the service you have to pay for it.
For example some cities like Calgary and Edmonton don’t plow resiential streets and the residents are left on their own. If we did that here for example we would get immediate negative feedback.”

How will the recent MPAC assessments of local properties affect taxes?

Norm “ The recent MPAC values the individual residents, but the budget is set by council and we tax accordingly.  The taxes of each homeowner are shifting within the budget that remains the same size. It will impact individual homeowners. If council decides to spend $400 million,
what MPAC does with valuations doesn’t affect that total budget.”

Keith “ If you recently got a new MPAC evaluation and it reflects what you could sell your house for in the marketplace then your assessment is probably bang on. If you don’t agree you could sell your house for that amount you can appeal and ask for a reassessment. Commercial taxes
have come down about 10% in Thunder Bay in the last 4 years. The industrial area is taking a hit which means more taxes have been placed on residential.”

A popular topic of discussion in Thunder Bay is the state of our streets and condition of pavement. How do you think we are doing in that area?

Keith “ The spring time is the worst time to talk about roads. The frost is coming out; you have the potholes and heaving roads. In the middle of the summer it levels out. Look at Golf Links Road and what we can do.  Valley Street is also a beautiful example with new sidewalks and curbing. It cost over $2.7 million  and that would be a large tax increase in one year if you looked at it that way. This year we are doing Balmoral, a large part of it. We are doing a temporary fix on Water Street.”

The Event and Convention Centre is an exciting project for Thunder Bay that seems to have come to a halt. What can we expect to happen with this project in the coming year?


Keith “ The Infrastructure Minister for Canada recently talked about the Building Canada Fund infrastructure fund of some $13 to $14 billion which was unused from the last government. They want to roll it out and have included hockey rinks and recreational facilities as a use.  We
fall within that perimeter. As far as we are concerned we meet that and will do everything we can do to get that federal funding rolled out. I would like to see a 50- 30- 20 split with the feds, province and municipality. If we get that we will build an event and convention centre plan A. If that is not the case plan B would be just an event centre with not a convention component.  We really need that convention piece as well though in my opinion.”


Norm “ In the past year there has been no public pronouncements on the Event Centre other that we are hopeful, but behind the scenes administration and council are working very hard to secure funding from the Federal and Provincial governments. We have had significant turn
over in senior administration in the City of Thunder Bay but we are working at reviewing the file, looking at options in concert with councils direction which is to seek funding.”

Keith “ We had the best consultants with experience on major projects like the Air Canada Centre in Toronto and they know where our facility should go and how to build it.  It would be a major economic driver for Thunder Bay. The downtown North Core including the waterfront piece has shown economic growth. We are Hockeytown North America. The Event Centre will have many more activities than just hockey.”


What can we expect to see happening with the economy of Thunder Bay in upcoming years?

Keith “ I think you will see lots happening. We are chasing the mining industry. I had a great meeting recently on the boreal forest and cutting more lumber and possibly having manufacturing sites here. We are the centre of the universe here with all these rich resources.
Already the value added components are helping out in the mining industry. The mining, resurgence of forestry, our smart city with medical technologies, medical school and law school. We have so much going for us including our relationship with the First Nations.  Energy
and climate change adaptation is also a huge potential we can turn it into a positive.”

Norm “ The CEDC is working very hard on all these opportunities and we are pursuing them. 95% of our businesses are small businesses. It very encouraging and I think we have we have a great future.”