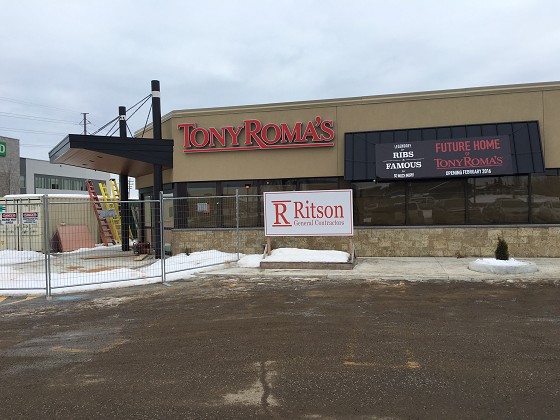 The new restaurant will occupy the former Swiss Chalet location with a complete new construction from the ground up which has been completed by local general contractor Ritson & Sons Contracting Ltd.
Ritson & Sons Contracting Ltd. was  formed in the spring of 2008 by Joe Ritson and grew a little each year. They mostly do general contracting in all parts of the carpentry trade. The employees are  all carpenters registered or in the apprentice program. Ritson & Sons will
do anything from finishing work  to rough carpentry work. They  also run a cabinet shop  to do millwork.
“ When we first started it was more residential work but now mostly commercial. My background  is I apprenticed with Tom Jones and Pradal Contracting. We have a staff of 10  in the company and office and shop in Westfort.” said  Joe Ritson, age 37, President Ritson & Sons
Contracting Ltd. 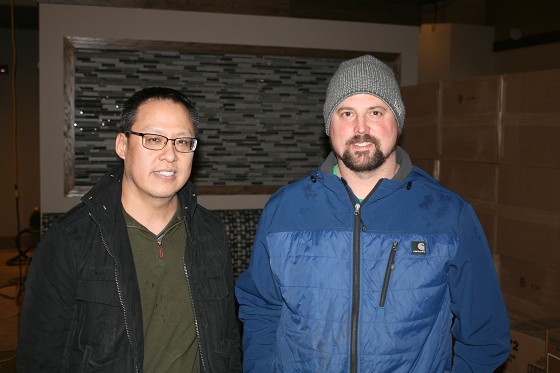 “ Tony Roma was a pretty good sized  building project for us with some   tight timelines that had to come together with a new restaurant at the end.  The installation of the kitchen equipment and training had to be timed out well. We started the project working for the landlord  with
an entire exterior upgrade to the building envelope and then moved inside where everything was gutted,” said Joe Ritson.
Ritson & Sons started work with the landlord at the end of May 2015 and began the inside work early November, for about 100 day work schedule to complete the new Tony Roma’s.
“  The project has gone well. We did all the carpentry work, framing and wood working which was extensive. All the booths were custom made. All the cambinitry and wood paneling was custom work.  The subtrades  also had lots of work to do with plumbing,  where the slab had to be cut open for new kitchen  equipment, new washrooms and assesibilty. Electrical was a substantial sub  trade with many high end fixtures installed. The flooring was quite extensive with a lot of tile work. The subtrades performed very well  and from the beginning understood
our time constrains.” said Joe Ritson. “ We worked longer hours and days here to keep the schedule. We will be demobilizing here and give it a final cleaning.

“ I am happy with the project.  It  shows well  and reflects what our capabilities are at Ritson and Sons with the  finishing work in here. It was agood job for us,” said Joe.  “ We are now bidding other work. It is the first bit of slow time  in the 5 years with the Thunder Bay economy   since we have been bidding the commercial work. Hopefully things will loosen up  in the next few months with infrastructure work.”