Debbie Amaroso has been the Mayor of Sault Ste Marie since 2010 and was in Thunder Bay recently for the Northern Mayors Conference in Thunder  Bay.    I asked Mayor Amaroso about how their Essar Centre, a 5000 seat events facility which  is 7 or 8 years old now, has affected the city. 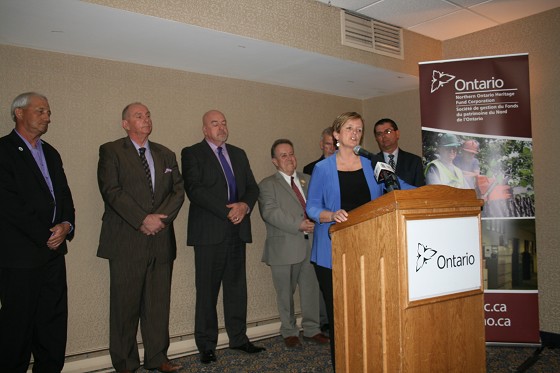 “ It was a very controversial decision to build a new facility in Sault Ste Marie as people had attachments to the old facility. When we started looking at a retrofit and knowing  it would be an uncertain budget because you don’t know what you are going to find when you get in there  we made the decision to go new. Now people are thrilled that we bit the bullet and went down that road.”

“  It has increased our ability to host major events such as the Scotties Curling and we are pursuing the Brier plus all the other entertainment we bring in. We have the Sault Greyhounds Junior A hockey as well.  It has added a gem into the whole tourist product that we can offer.”    “ The Essar Centre has 5000 seats and some standing room as well as box seating. We have the floor space for conventions. In a 5 to 7 minute walk  of our downtown core there are several hotels available. It is a very active area when events are on. The facility was  built at a good time to keep our costs  around $40 million and we had participation from the federal and provincial governments.”

“ All I can say is if you have done your due diligence and feel it is the way to go then take the leap and do it. Our old building  in Sault Ste Marie was over 50 years old and do you invest millions of dollars in it  because once you are done it is still a 50 year old building. Our new centre had helped us market our tourism and events. These facilities  are not money makers but we are doing better than we thought we would in our initial forecast.”

“  In Sault Ste Marie  we are holding our own. This year we have seen unprecedented assessment growth.” The  other mayors in attendance from Timmins, Sudbury, Kenora were pleased with the meetings.    “We, the North,  are the driver of the economy  of Ontario with the mining and forestry sector. It is not the manufacturing sector of Southern Ontario any more. It is the natural resources of the North. Once the Ring of Fire gets going we will drive all of Canada.” Mayor Hobbs Thunder Bay.