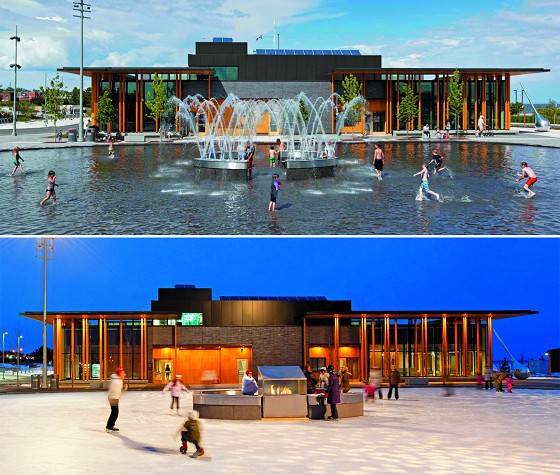 Since opening, the site has seen 5 times the number of users (100,000 annually) and the creation of 9 new local businesses.

Toon Dreessen is the President of OAAHave you seen the site?
“ I had an opportunity to visit Prince Arthur’s Landing several times last summer and really enjoyed it. You can see the area is quite beautiful and the development is having a good impact on the community with people using it. I am really excited it has won an award.”

What is the award all about?
“ The award is a design excellence award. It is more than the building is beautiful or existed on its own but about how the building functions, its meaning and impact on a broader community. Does it make good business sense, is there something of value to the building and
how does it support better architecture in its community and have a broader social impact that is positive.”

Why did this project win an award?
“ We can see the Prince Arthur's Landing in its context with the marina, the outdoor ampitheatre and the history of everything in the area.  It is having a positive impact by bringing tourism and businesses to the area and developing a broader impact. There has been
a five fold increase in visitors to the area and 9 new businesses.”
“ The investment has been municipally driven with a master plan and the impact of the investment has had a broad impact.The small seed investment has had a larger impact with more tourists and residential development. People see the value of architecture investment. The long term impact gives a massive increase over the life cycle of the buildings. The master plan for all the buildings fit together and will continue to happen.”

These awards to open to any OAA member firm. They  had submissions this year from mostly Ontario, but also Kamloops, Surrey, Montreal, Vancouver,  two from Edmonton Russia and the Middle East.There were 185 submissions this year, and 20 were short listed as really spectacular.  Of those 20, 10 were given awards.

“ Prince Arthur's Landing is a world class project and special . I think it is fantastic and I absolutely loved it.  It fits with in its context beautifully. The overall harmonization of the site is
reflective of aboriginal culture.”