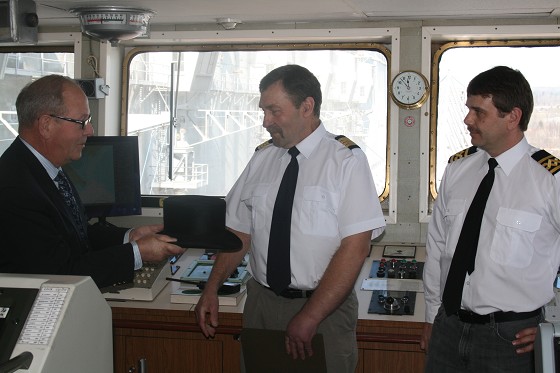 Thunder Bay Port Authority along with the City of Thunder Bay and the Thunder Bay Chamber of Commerce held its annual Opening of Navigation "Top Hat" Ceremony aboard the MIV Algoma Enterprise at Richardson's Current River Terminal on Wednesday, April 23, 2014. The community annually recognizes the vessel which opens the local navigation season. The season is opening later than past years due to challenging ice conditions throughout the Seaway system following the harsh winter of 2013-14. MV Algoma Enterprise, owned and operated by Algoma Central Corporation, arrived in port Monday, April 21 at 16:23. She was closely followed by MV Radcliffe R. Latimer, another Algoma vessel, which arrived at 20:00 the same day. Captains Edwin C. J. Seward and Richard Hesketh, along with Chief Engineer Anthony Arcand were recognized at this event. Mayor Keith Hobbs, Chamber of Commerce Board Chair Uli Walther, and Port Authority Board Member David O'Brien were on hand to welcome Algoma Enterprise to Thunder Bay.

“ The port is a 300 million a year economic impact for Thunder Bay. This year we have a lot of interest from Western Canada as they have a big grain backlog. We have about 20 ships waiting to come in the next 10 days.” “ This winter has been the worst I have ever seen here but this year should be a big year for us. We will play a role. The backlog is so large it will take til the next harvest to move it, it is that big. It will create a more consistent year.” “ A laker like this can carry 26,000 tons and ocean vessels are usually able to carry 23,000 tons. We can load 7 ships at one time at the port but that is the best case situation.” Captain Edwin CJ Seward was born at Cape Breton Island and has been captaining ships for 41 years.   “ We left Port Colborne April 1st and a normal three day steaming time to get here took 20 days as the ice was so bad all the way. It may be a little easier going back. Lake Superior is the worst I have ever seen. In some places the ice was 8 to 10 feet thick. We got stuck a few times and wouldn’t have made it with out the icebreakers.   “  I have enjoyed the career and will retire in about 1 year.  Today we are 6 weeks in and 6 weeks off on the job. We have a crew of 25 people.”