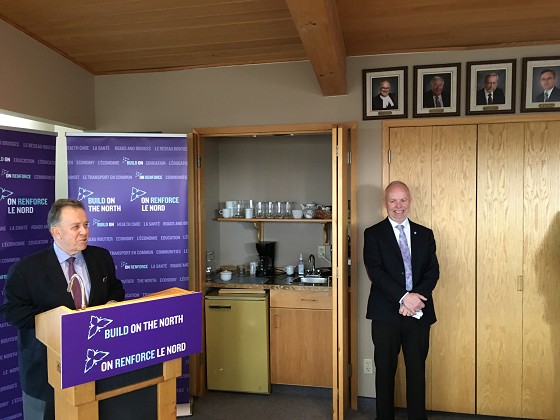 With an investment of $1 million through the province's Northern Ontario Heritage Fund Corporation (NOHFC), Thunder Bay Port Authority is building on its Keefer Terminal operations. The project involves the removal of an obsolete building to create a larger loading area and
constructing a new 40,000 square-foot storage facility that will allow the port to handle more goods.

Since 2003, the province has committed over $1.1 billion through the NOHFC to 7,310 projects, leveraging more than $3.9 billion in direct economic activity and creating or sustaining over 27,500 jobs in Northern Ontario.

Ontario is making the largest infrastructure investment in the province's history -- about $160 billion over 12 years, which is making 110,000 jobs possible every year across the province, with projects such as roads, bridges, transit systems, schools and hospitals. In 2015, the province announced support for more than 325 projects that will keep people and goods moving, connect communities and improve quality of life.

Investing in economic development in the North is part of the government's economic plan to build Ontario up and deliver on its number-one priority to grow the economy and create jobs. The four-part plan includes investing in talent and skills, including helping more people get and create the jobs of the future by expanding access to high-quality college and university education. The plan is making the largest investment in public infrastructure in Ontario's history and investing in a low-carbon economy driven by innovative, high-growth, export-oriented businesses. The plan is also helping working Ontarians achieve a more secure retirement.

Quick Facts
• Thunder Bay Port Authority is a government business enterprise with a mission to promote and invest in the efficient integration of marine, rail, and road transportation systems and participate in the region’s economic development.
• The Keefer Terminal complex – a marine warehouse/storage/intermodal facility – handles cargo destined for Western Canada and serves the major industries in Northwestern Ontario.
• For the 2015 shipping season, the Port of Thunder Bay handled 8.9 million metric tonnes, ranking as the third-strongest year since 2000.
• In 2014, Thunder Bay Port Authority provided record financial results and led to the generation of $1.5 million from operations.
• In 2011, Thunder Bay Port Authority received a $1 million NOHFC investment to acquire a new crane capable of lifting up to 104 tonnes of cargo between marine vessels and rail or truck trailers
• In the Thunder Bay area, the NOHFC has invested about $181 million in 1,453 projects that have helped generate or retain more than 5,500 jobs since 2003.
• The NOHFC’s investments in the North’s transportation infrastructure are an important part of the Ontario government’s Growth
Plan for Northern Ontario.

“Improving Northern Ontario’s transportation infrastructure is a key objective of the Growth Plan for Northern Ontario. Our government’s investment in Keefer Terminal will not only expand Thunder Bay Port Authority’s ability to move more cargo, it will also contribute to the
regional economy and support jobs in the area.”
“ The focus of the  fund is to build the economy in Northern Ontario  and no better use than to support the Port of Thunder and the Keefer Terminal. This will allow them to build a new cargo storage building. It helps employ 880 people in Thunder Bay.
Michael Gravelle

Minister of Northern Development and Mines and Chair of the NOHFC

“By investing in the expansion of goods handling capabilities at the Port of Thunder Bay, we are ensuring that this facility will continue to be an important hub for the movement of cargo destined for Western Canada and into the Great Lakes system. I am very pleased that the province could support this project and help retain good jobs for our local residents.”
Bill Mauro
MPP for Thunder Bay-Atikokan

“The 2015 season was a successful shipping period for the Port of Thunder Bay and our expansion of the Keefer Terminal operations will help us further enhance our capacity to handle more goods and cargo. This provincial investment will help us better utilize our dock-side
operations and establish new modern storage facilities.”
“The building  is about 40,000 square feet in size similar to the last building we built in 2005. It will be a heated structure, clear span and have many uses. Construction should start in the fall and completion date 2018.’
“ The Port generates our own income. It helps us with this Ontario investment and the crane investment recently.”
“ Keefer is a 90 acres site and the whole port about 350 acres,  Some of the buildings are now 50 years old and we need new buildings and heated as well. Keefer has about 150 people working right now.”
Tim Heney
CEO, Thunder Bay Port Authority


“ It is always a happy day when you get $1 million dollars in the community. The Port  does great work for the city. It is a great economic  driver in our economy and creates jobs.”
“ I worked before doing  harbour sounding in the lake and also worked in the grain elevators and had a lot of experience around ships.  As mayor  to see the economic impact is great.”
Keith Hobbs, Mayor of Thunder Bay