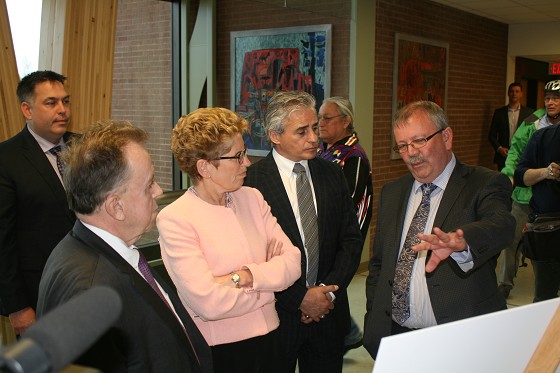 Today in Thunder Bay, Premier Kathleen Wynne announced the investments in the two facilities, which are targeted to open in September 2017. The province will provide $2 million through the Northern Ontario Heritage Fund Corporation (NOHFC) for a Student Wellness Centre on the
college's main campus in Thunder Bay. It will be a venue for students and the community to improve their physical and mental health in new athletic facilities, meeting and training space.

Ontario will also invest $1 million through the NOHFC in a new facility to house Confederation College's Sioux Lookout campus. The college is developing the facility within the new Sioux Lookout High School that the Keewatin-Patricia District School Board is building, which will
enable the college and high school to share resources such as labs and shops. These cost efficiencies and modern facilities will allow the college to expand enrollment and add new programs that teach skills local employers are looking for, including hospitality, culinary arts,
environmental sciences and applied health sciences.

The government is investing in community infrastructure and postsecondary education as part of its Growth Plan for Northern Ontario.

Investing in economic development in the North is part of the government's economic plan to build Ontario up and deliver on its number-one priority to grow the economy and create jobs. The four-part plan includes investing in talent and skills, including helping more people get and create the jobs of the future by expanding access to high-quality college and university education. The plan is making the largest investment in public infrastructure in Ontario's history and investing in a low-carbon economy driven by innovative, high-growth, export-oriented businesses. The plan is also helping working Ontarians achieve a more secure retirement.


QUICK FACTS
• The 36,500-square-foot Student Wellness Centre will include a gymnasium, change rooms, recreational space, multi-purpose rooms and a room dedicated to academic education and training. Thunder Bay will be able to use the centre to host large-scale community and sporting
events, and local school boards will be able to use it for high school sports.
• The project to build the centre aligns with Ontario’s commitment to support the development of community hubs by helping local partners bring services together and use spaces to better serve communities.
• The centre’s design will reflect Indigenous elements and include spaces for Indigenous wellness and spiritual programming. It will provide students with holistic activities to reduce stress and develop good lifelong habits for healthy lifestyles.
• Confederation College — which was founded in 1967 and now has nine campuses across Northwestern Ontario — has the highest proportion of Indigenous students in the province (26 per cent) and the highest percentage of students who are the first in their family to pursue a
postsecondary education (53 per cent).
• Since 2003, the province has invested more than $1.1 billion through the NOHFC in over 7,300 projects, leveraging more than $3.9 billion in direct economic activity and creating or sustaining over 27,000 jobs in Northern Ontario.

QUOTES
"Our government’s investments in Confederation College’s Thunder Bay and Sioux Lookout campuses will open up new possibilities for students and build up communities in Northwestern Ontario. We are strengthening postsecondary education as part of our plan to make sure that people in every corner of Ontario have the opportunity to achieve their full potential."
—  Kathleen Wynne, Premier of Ontario

"The investments our government is making in Confederation College through the NOHFC will help students in the North continue to excel. We’re so proud to be providing a total of $3 million to support the building of these two new facilities that will provide additional space for the College to expand and deliver innovative and exciting programs for their students here in Northwestern Ontario."
— Michael Gravelle, Minister of Northern Development and Mines

"Our government is proud to support capital projects at colleges and universities that give students access to modern facilities where they can connect with each other through shared spaces and build the skills they need to find and keep good jobs. These two projects will further
solidify Confederation College’s connection with the local communities they operate in, while encouraging more local youth to participate in postsecondary education."
— Reza Moridi, Minister of Training, Colleges and Universities