The City of Thunder Bay  hosted the members of NOLUM for a series of  meetings on Friday, July 3 and Saturday July 4. Agenda topics  included Building Ontario Up: Municipal Infrastructure, mining  readiness, and climate adaptation.

I sat down with each Mayor to ask about their communities, their  plans moving forward and impressions of Thunder Bay. 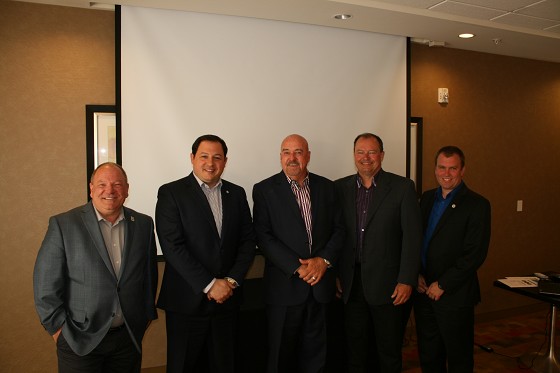 Mayor Al McDonald, North Bay
“ The dominant conversation today is around infrastructure and the  provinces plan to invest record number of dollars and how that is  shared. The municipalities need sustainable infrastructure money each and every year. It should not be based on an application, or begging
process if you will, but based on per capita. In North Bay it would  go  into critical capital work or economic development work that we currently have  on the books but have no way of funding.”
“ North Bay has a population of 55,000 and the region with 20 minutes  is 85,000. We are  3 hours from Toronto all with 4 lane highway.”
“ Thunder Bay is a beautiful community, very progressive. The  citizens  are very friendly and I am totally impressed. I will get a  chance to see your marina today. We invested $30 million in North Bay  and I understand you have invested over $100 million in your marina.
This is a beautiful part of the country.”

Mayor Steve Black, Timmins
“ Our major priority is our road infrastructure and our connecting  link through the community which is a $50 to $70 million project. We  are also looking at a multiuse recreation centre as well, starting  with an aquatic complex and then economic development  to improve
rail lines and infrastructure to access some of the mineral  developments in our region.”
“Thunder Bay is a very impressive community and the Mayor has done a  great job hosting us  and  providing feedback on what is going on here.”
“ We are a population of 45,000 and just under 3000 square kilometers  in area. Mining is our main contributor and forestry is second.We are  a 8 hour drive from Toronto or 1 1/2 flight.”
Steve is 33 years old and the youngest mayor in Timmins history.

Mayor Christian Provenzano, Sault Ste. Marie
“ In Sault Ste Marie we want to bring our critical infrastructure  up to date. Our electrical system need a lot of work. The basics of  water, electricity and roads- we have to make sure we are doing a  good job in those areas. We are also interested  indeveloping some critical transportation links  which is a economic  development project.  We are working on the Port of Algoma and  becoming a key regional structure.”
“ Our economy is decent and we should expect some growth this year.  The Essor Centre is a nice asset in S S Marie. We have a river that  runs right through us and  are near parks.”
“ I have  enjoyed my time in Thunder Bay and your roads are in  pretty good shape here.”

Mayor Brian Bigger, Sudbury
“ We have a number of projects in Sudbury. We are working on  improvements to our east west  corridor transportation. Over 50% of  the ore extracted in Ontario goes through our community and it takes  a toll on our roads. We  have just had the coldest February in history.”
“  Our economy is growing slowly. Our new council is focused on  economic development. We need to invest in our downtown urban core.  The population of Sudbury is 160,000 and GDP is $5.5 billion  with  mining  at $4 billion or over 60 % of of GDP.”
“ Thunder Bay continues to grow with lots of new investment here like  the new hotel we are in today. This year our council  held municipal  taxes to a 0 % increase. Previously I was auditor Generalfor the City of Sudbury.”

Mayor Keith Hobbs, Thunder Bay
“ We  try to rotate these meetings amongst cities so it was Thunder  Bay’s turn this year. It is nice to have the 5 large major  city  Mayors here and talking about our issues which are similar. We have a very diverse agenda including MPAC and the climate. It is good to  share strategies. We hope to put out a few position papers on mining  readiness  and other issues.”
“ The infrastructure fund recently announced  is good and we want a piece of that pie.  We are a very strong voice when we go together.  In Thunder Bay we look after our infrastructure for the most part  with an enhanced infrastructure program  of $12 million year over year extra. We want funding for those major projects like the event centre  and  a new conservatory- that are huge projects. We will prioritize  those projects for the next 10 years as a council.”