It's Two for Two for Habitat 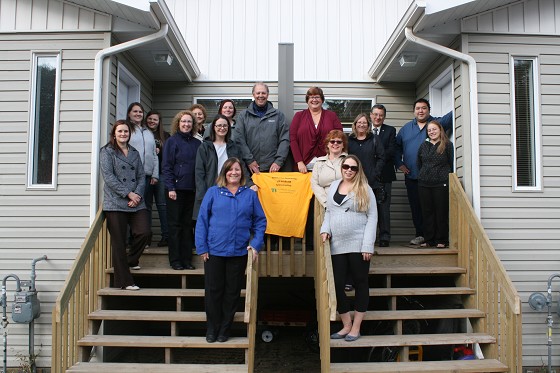 After five years of fundraising, and over one year of being under construction, the home is now completed thanks to the help of community volunteers and supporters like Gillons Insurance which financed the home. David Baxter, Gillons Insurance Manager, says; “The Gillons team
is proud to support Habitat for Humanity Thunder Bay and two families in need. It takes capital to finance a house but it takes love and dedication to make it a home - which Habitat for Humanity Thunder Bay and their volunteers have done. This is a very inspiring day for all of us and the Davis and Thompson families could not be more deserving.”

Teresa Davis, single mother to three teenagers and Thunder Bay Insurance Habitat for Humanity Legacy House recipient, says she used to spend the majority of her monthly income on temporary housing before receiving the Habitat home. “I’m not in a place where I qualify for a
traditional mortgage through a bank. I had previous financial difficulties and it’s quite hard to support three growing teenagers on a limited income;” says Davis. “I never thought I’d be able to own my own home, but now I am working towards that goal. We used to live in rentals and it was hard to get comfortable in a temporary environment. Now my kids can decorate their rooms and feel like they're at home.”Each year on the first Monday of October, The United Nations recognizes World Habitat Day as a day to reflect on the state of our cities and towns, and on the basic right of adequate shelter. It is also intended to remind the world that we all have the power to shape the future of our cities and towns to promote health and happiness among citizens,
and foster economic investment and development.

Continues Davis; “We can’t wait to become a part of the neighbourhood and give back to the community that has embraced us in our time of need. World Habitat Day is about shaping our city and there’s no better way than to provide individuals with the chance to break their cycle of
poverty.”

“ We decided this was a perfect day to dedicate these two new houses. This is the first time in over 10 years that we have built semi
detached homes. We have had construction delays, financial and road work going on so it took 1 1/2 years to  complete, longer than we hoped, but the families are in and their children in their proper schools so we are happy.”
“ We have  a lot of families spending well over 50% of their family income to pay for housing. We believe families a should not pay more than 25% of their income for their housing. The houses  are built nd paid for  by Habitat for Humanity. We actually hold the mortgages  for the families  about $1.2 million in total right now. We administer them   and can do a no interest for the families. We look at their tax assessment and make sure they are at 25%.of income.”
“ We hope to build next year on Finlayson and Simpson after we raise the funds. We will  be there for about 4 years with 4 properties there and looking forward.”
“ The families are chosen by a process laid out by Canada Revenue Agency. They have to live at or below the low income cutoff, in need of housing, have an income that can pay back a mortgage and lived in Thunder Bay for minimum 3 years as citizens of Canada or landed
immigrants.”

Teresa Davis home owner
“ We  have the sense of having permanence or somewhere to put roots down  and a sense of independence. The efforts of all the volunteers they have put out for families like mine is amazing. It is very expensive to find somewhere adequate to rent here with three teenage
children.”

Dave Baxter
“We started this in 2010 at Thunder Bay Insurance  as a joint effort of ownership and staff. Janis Whatley,  one of our employees, had this land available so we could do a two family home. Gillons have given us the time off to work on this build. It has been a true effort to raise
this money We wanted to give back to our community.”