The first Engage Digital Media Summit was held recently in Thunder Bay at the Valhalla Inn. It featured some exceptional speakers that offered current information.
David Ciccarelli is the CEO and Co founder of voices.com and was born and raised in Thunder Bay, which has always   been near and dear to his heart.
“ My wife and I started a high tech company in London, Ontario.  It began as an idea for an online marketplace that brings together voice actors and  people like video directors and others looking to hire voice actors for maybe a commercial or pod cast.  I am here today to tell the story of how we started  after jotting down the initial idea on a napkin at the  kitchen table.”
The company now has a current team of over 100 employees.
“ Our focus is about creating culture. Every company can  find that ultimate competitive advantage by focusing inwardly on their people. We have been  able to tap into new resources and customer segment by developing our own people to work smarter not harder. We need great values, innovation and excellence. We  need a common language so it means something to every person, not just the words we speak,  but also the body language and tone.  We set performance standards so everyone knows how to operate in your organization and lastly culture - tangible artifacts that create an identity.”
The firm has attracted new employees and retained their staff. David Ciccarelli went to school for  audio engineering and then came back to Thunder Bay to open a small recording studio in his parents basement. He moved to Southern Ontario and opened the studio again.  Here he met his  wife and together they transformed from running this recording studio to this online marketplace.
“ It has been a long journey. Our name www.voices.com is our visibility online.  We work with over 250,000 people online each day. Just imagine that would be like filling up three NFL football fields up to the rafters every day. To service this you need a great online presence,” said David Ciccarelli. “ Our 100 staff are in marketing, sales and customer service. We bring the two parties together- we have 125,000 voice actors who work with us and bring them to the corporate clients. At our start we had $10,000 in revenue and this year will do over $10 million in revenue.” 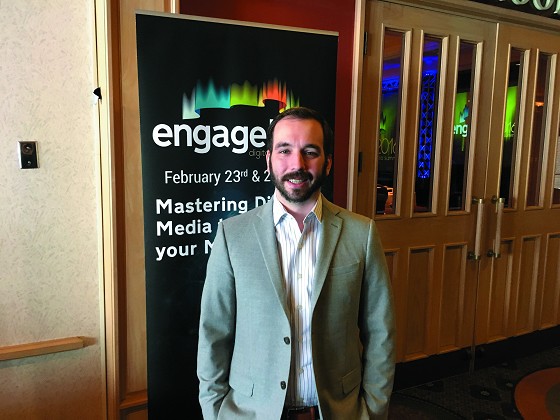 Evan Hadfield is the CEO of launch-pad and son of famous astronaut Chris Hadfield.
“Places all across this country are starting to realize they are bigger than themselves and their region and have a voice that resonates outside their community. Things are happening everywhere. It is not so much where you are but to realize we are all together. Everyone has
similar problems say in BC or Alberta. We want to be heard in Canada. We are next to a nation that makes it difficult to get our own unique voice out. It is easier now to get our messages out.  Canada has an amazing culture and people  and we are technically  the most educated
people per capita in human history but we don’t act that way.  We need to  let others in the world know that what we are doing here in Thunder Bay resonates to a small town in Russia or the US. The concerns are very similar. I want people to realize where they fit in the global
sphere. We can connect with anyone and a major nation driving the worlds economy.
My father, Chris Hadfield, for example has his number one market in Ireland reacting to Canadian innovation.”