Over 1450 graduates received certificates, diplomas and advanced diplomas today at the Thunder Bay Community Auditorium during Confederation College’s 2015 Convocation ceremonies.  Graduates from the School of Health and Community Services were featured in the morning, while the afternoon ceremony included the School of Aviation (ACE), School of Engineering, Technology and Trades and the School of Business, Hospitality and Media Arts. 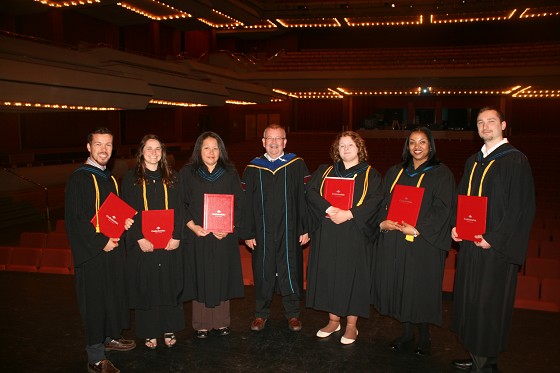 Confederation College President Jim Madder, presided over the ceremonies. “This represents a significant crossroad for our students as they continue on in the pursuit of their dreams,” he said.  “We are extremely proud of our students for all that they have accomplished. We wish them continued success as they move forward into the next phase of their individual journeys and remind them that Confederation will always be there to support them.”

The recipient of the Governor General’s Award for 2015 is Paul Robitaille, who graduated with a 4.0 GPA from the two-year Forest Ecosystem Management Technician program.  Previously, Paul successfully earned a degree in Environmental Sciences from McMaster University.  Paul is someone who has truly made the most of his time at Confederation College, having become fully immersed in the College community and having taken on a variety of leadership roles.  Paul will be staying in Thunder Bay to pursue the Master of Science in Forestry program at Lakehead University this fall. Paul Robitaille was also awarded the Academic Award of Excellence for his program, the President’s Award for the School of Engineering Technology, the Derek and Joan Burney Award, and the SUCCI/OASA Student Leadership Award.

Academic Awards of Excellence were also presented to the following students featured in the backgrounder for their respective programs: Bobbi-Lee Anderson, Anton Bokhanchuk and Cheyanne Degagne.   Paul Robitaille from Midland “  My program was the Forest Technician program  which is 2 years with 2 co-ops in the summer. It was hands on and a good combination in the class and in the field. They connected us with a lot of employers in the field which was good.” “ In September I am going to start the Masters of Forestry program at Lakehead University. It has been phenomenal here in Thunder Bay and I plan to make Thunder Bay home for the foreseeable future.”

Sandra Fox Business program graduate who is from Big Trout Lake, about 1 hour flight from Sioux Look Out.
“ I graduated from Business Accounting last year and Business Administration this year. I loved the program, it was  an experience. My fellow  class mates helped each other as a team. I had my days when I wanted to throw in the towel but we worked as a team.”   “ I am planning to go home for the summer and try and get a job and if not I will come back to Thunder Bay. I have really enjoyed my time at the college. The professors were very understanding and just awesome. The students helped each other as well which was great.”

“ It is a remarkable day today. We had hundreds and hundreds of graduates with  great energy in the room- happy graduates and happy parents. We had parents come from far away for this graduation- places like Nigeria.” “ Our graduates have lots of opportunities to go into work settings or further education opportunities. They can improve their jobs and our foreign students  can become Canadian citizens as well.” “ We have many students move back and forth to Lakehead University to continue their studies as well” “ We are a great value at Confederation College as many of our programs are half the tuition cost of university and you can get full credit for our courses at university as well say in business. We are expanding our delivery into smaller campuses , our  smaller locations. We have been doing graduations in the smaller communities  already and will have a total of 9 ceremonies this year.”