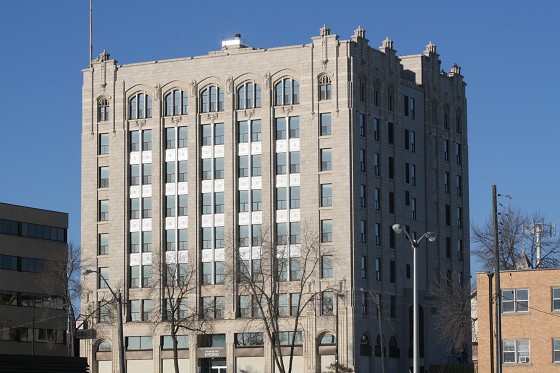 December 6, 2013 – The City of Thunder Bay is proud to announce the 100th anniversary of the historic James Whalen Building.

“The Whalen Building is a Thunder Bay landmark,” said Joel DePeuter – Manager, Realty Services. “Architecturally it’s beautiful, and has played a key role in City operations over the years, housing many City offices. The City is proud to own such a historic building.”

The eight-storey Whalen Building, located at 34 Cumberland St. N., was completed in late 1913. James Whalen commissioned the building as part of his quest to turn the towns of Fort William and Port Arthur into the ‘Chicago of the North.’

Built in a Chicago skyscraper style, construction of the Whalen Building cost $555,000. It was the tallest building in the area at the time, and its design – by Montreal architectural firm Brown and Valence – includes reinforced concrete, terracotta paneling, gothic elements, marble floors and roof turrets.

Whalen intended the building to be used for commercial and office purposes, as well as house a bank. His own Great Lakes Dredging Company occupied the seventh floor. Shortly after the building’s completion, Port Arthur moved its municipal offices to the second and third floors, where they remained until amalgamation in 1970.

The building came under City ownership after Whalen ran into financial trouble in the mid-1920s, and the building fell into tax arrears. The City purchased the Whalen Building from a bank in 1931 for just $175,000. Today, it houses several offices, including those of Thunder Bay Hydro, the Thunder Bay Community Economic Development Commission, and Cancer Care Ontario.

“The Heritage Advisory Committee applauds the City for its work in preserving this important part of Thunder Bay's cultural and architectural heritage," said Andrew Cotter – Chair, Thunder Bay Heritage Advisory Committee. “It’s exciting to see this building continue to play such a prominent role in the City, and we on the committee look forward to what the future holds for the Whalen Building.”

The Whalen Building is a Designated Heritage Property

Andrew Cotter, Chair of the Heritage Advisory Committee.   " I have an interest in history and historical buildings. The Whalen building  is important as this building is a landmark building. James Whalen, the builder of the building, really wanted to promote Thunder Bay as the new Chicago of the north.”   “The building was built around 1913 /14 with new construction style like a skyscraper. The building was beautiful in stature and signified Canada. James Whalen occupied the building with  some of his 77 businesses  staff at the time. In 1914 he moved his offices there. The building was sold to the City of Port Arthur  in 1931 for about 20% of what it cost to build  after James Whalen went bankrupt. It then featured city hall and the public utilities commission.” “ It is important to keep the building going  as it is important to keep our history. It is almost a living museum  of what was happening around that time. We have 26 heritage buildings in Thunder Bay and are  trying to preserve those buildings to tell the story of the past and promote our future.I think Mr Whalen would be happy to see the building be 100 years old and ready to last another 100 years.”

Joel De Peuter, Manager of Realty Services for Thunder Bay “ Council feels this building is a very important heritage asset that symbolizes the remarkable history of Thunder Bay. It is in an important location that ties in nicely  with the waterfront development. We feel the building can be a tool for economic development and can be used for job creation.” “ The building is about 65,000 square feet and about 2/3  of the space is currently leased out. Recently the DSAB moved out of 30,000 square feet and that is the space that is being remodeled. We are reconstructing the 3, 4 and 5th floors at a cost of $3 million. The lease cost is around $20 to $22 all inclusive exclusive of parking.” “ The tenants here value being in a heritage building and the space is prestigious. The reconstruction required after 100 years is complex.”