Ring Of Fire Complexity- What

Ring Of Fire Complexity- What We Need To Make It Happen!

John Mason is the Project Manager of Mining Services CEDC in Thunder Bay.   He is a proud graduate in geology from Lakehead University and has worked for 36 years in Thunder Bay for the province in the region with prospectors and explorations on many properties. He has seen lots of different cycles in metal price changes. The ultimate game is to create new mines. 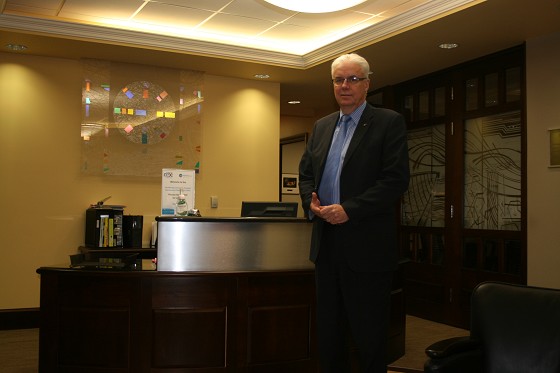 What is the Ring of Fire John?

The Ring of Fire is a relatively new discovery, what we call a mining camp or new mining district that has been discovered in the last 6 or 7 years. It consists of nickel, copper and chromate- a new metal to Ontario that is used for stainless steel. It is a brand new emerging area and is remote, about 550 km’s northeast from Thunder Bay, on the edge of James Bay Lowlands. The Ring of Fire is inaccessible by rail or road but accessible by air on ice strips or helicopter in the summer. The main players have been Cliffs Natural Resources, which have suspended operations, Nor Ont Resources and KWG with some others like MacDonald Mines that have a series of base metal discoveries. The Ring of Fire was first heard of in 2005/2006.

So this is a very remote area?

The remoteness is 54 degrees latitude between the Musselwhite and Victor Mine, Ontario’s only diamond mine owned by De Beers, a major company. De Beers have access in through Attawapiskat as well as a power source. They do use aircraft to move their people there as well as by road link. The infrastructure is a little better developed there.

Why do you think Cliffs has suspended operations?

Cliffs were concerned there wasn’t support for infrastructure into the site with road access from South to North. Nor Ont wants an east to west road from near the Pickle Lake Hwy for their nickel copper deposit called Eagle Nest. They are going ahead with their project and excited about the development corporation recently announced by the province.

The price of Chromate is not as strong as it was once, which is an issue. The chromate is a demand mineral used on stainless steel. The big players who need the product are in Asia for appliances or vehicles.

One of the main issues is access. Once the infrastructure is there more mineral exploration will happen. KWG is now drilling the Black Horse to what is called indicated and measured category. The grade and thickness of these projects is exciting.

It will also elevate the quality of life for the First Nations communities with electrification on access.

We  can use it as a catalyst to provide economic development and quality of life.

There are also difficulties in the First Nation consultation process getting together and working through issues.  You need an agreements struck so there is value and benefit for everybody.  There is a willingness to have that happen.The communities want to be a labour resource. Greenstone and Thunder Bay want to be a supply chain with materials required in mine construction and operation.

The Ring of Fire Project seems to be slowing down now?

The development had been slowing down and a lot has to do with the financing market. The last three and half years have not been good to the junior market. In the case of Cliffs they need to focus on their main revenue source and then come back to it. They have significant debt level and just announced their Waboose Mine is being closed. Cliffs has some current income from production while Nor Ont does not and KWG does not. They raise money by selling shares. KWG  have already presold some of their advance smelter production for cash to allow them to develop and explore. These are challenging times right now no question about that.

How long should it take a mine to be in production from the initial time of discovery?

The quickest mine in Ontario was the Hemlo Mine near Marathon that was three years from discovery to production. It can be 8 to 15 years sometimes based on location, price of minerals as well as environment assessment. Cliffs were also frustrated the EA process schedule they had proposed wasn’t approved.

It’s a complex process to get a mine up and running. It is all money going out until there is production. The feasibility study determines whether the mine will open. Many of the mines in NW Ontario have their feasibility studies done. Once the EA studies are complete they can proceed.

Do you think we need a catalyst from government to get the project moving, say a transportation link?

If the province and federal governments said the would build a road or rail link it would be a catalyst.  Even if it was a partnership with 1/3 funding each coming from the province, federal and companies.

The province also could finance it and a toll fee added that the companies would pay for over 30 to 100 years. There needs to be a formula worked out so everyone can win.

The province could get the money back from taxes, royalties, personal taxes and the salaries, which would flow back to all levels of government and could exceed the investment over time. There are case examples of this with Quebec and BC where it is taking place- examples of these types of investment paying off. Why can't it happen at the Ring of Fire? Once the infrastructure is there more mineral exploration will happen. KWG is now drilling the Black Horse to what is called indicted and measured category. The grade and thickness of these projects are exciting.

Another important area seems to be First Nations consultation?

Would there be an economic benefit in Thunder Bay and Greenstone?